Nothing makes me wetter than when a man is big where it counts… his brain.  A person who finds intelligence or the human mind a sexually attractive trait, and puts it before appearance is called a sapiosexual.  Oh yes baby, talk nerdy to me.

Nymphobrainiacs can be aroused by the intellectual perspective of another person..  We are not saying skip the gym all together, but maybe add reading to the repertoire.

People are changing in the evolutionary chain, and brawn is not as necessary of skill for survival these days. However, the brain can have you living comfortable with the means to whisk away the latest Betty of your picking and spoil her rotten with dazzling dinner topics, teasing her erogenous zone with tantalizing pillow talk, and stimulating her All. Night. Long.

Have you ever heard the analogie women are like spaghetti and men are like waffles? I first heard it in psych class.  It was explained that men’s brains are like waffles. Each square of the waffle is filled with one idea. Once the square is full he moves to the next waffle space. Some of the spaces can be empty. Yes, men can think of literally nothing.
Women’s brains are like spaghetti. Each pasta stran is an idea and they intertwine with other ideas like a big pile of noodles on a plate. After hearing this, it made sense why women are always multitasking.

So why am I talking to you about the sex appeal of intellect and brain power?

As we age into our 30’s it feels as though life is using up more of our brain energy and we are being stretched thin.  I don’t know about other’s experiences, but as I approached 40 I felt my memory was not what it used to be, as well as my ability to focus. Our brains age too. Reading and certain types of puzzles can help keep your brain strong. Physical activity keeps the synapses in your brain strong and can help delay brain degeneration and related diseases.
Balancing your hormones will help improve your cognitive function and also prevent brain degenerative decline.
While exercise, hormonal balance and reading are all part of my life routines… they were only preventing further decline of my cognitive function. What I was actually hoping for was an improvement.
After a hormonal consultation with our amazing Nurse practitioner, I discovered there is a way to improve and not just prevent. I was explaining to nurse Rivera that I felt more scattered than usual, anxiety (which I never really had before) and like my “mom brain” was on overtime.  This is when she hit me with, “have you tried NAD+?”
I recently saw our compounding pharmacies sent an article on it, but it wasn’t a treatment I had read up on yet. So obviously I jumped down that rabbit hole and not only found out the amazing benefits of NAD+, but that we had a few other treatments to boost your brain power too.

So here is the meat of the sandwich, all the treatments we have to boost that big, beautiful, bulbous brain, the protocols and costs. Please email ginger.k@medtechmanagement.com if you have more questions or reach out through the patient communication line. We will be honoring special pricing on anyone who wants to start these treatments for the whole month of March.

NAD was first described in 1906 by Harden and Young as a cell component that enhanced alcohol fermentation (Harden and Young, 1906). Then in 1936, Warburg showed that NAD is required for redox reactions (Warburg and Christian, 1936) and solidified the nomenclature: “NAD” refers to the chemical backbone irrespective of charge, “NAD+” and “NADH” refer to the oxidized and reduced forms respectively. In 1963, a breakthrough came with the discovery that NAD+ is a co-substrate for the addition of poly-ADP-ribose to proteins (Chambon et al., 1963).

Nicotinamide adenine nucleotide (NAD+) has emerged as a key regulator of cellular processes that control the body’s response to stress. NAD boosters, small molecules that raise NAD+ levels, are now considered to be highly promising for the treatment of multiple diseases and the potential extension of the human lifespan.

Nicotinamide adenine dinucleotide (NAD) is one of the most important and interesting molecules in the body. It is required for over 500 enzymatic reactions and plays key roles in the regulation of almost all major biological processes (Ansari and Raghava, 2010). Above all, it may allow us to lead healthier and longer lives.

By modulating NAD+ sensing enzymes, it controls hundreds of critical processes from energy metabolism to cell survival, rising and falling depending on food intake, exercise, and the time of day.

NAD+ levels steadily fall as we age, leading to a decline in the function of cells and organs. By raising NAD+, NAD+ boosters can have profound effects on the health and survival of mammals. Increases in NAD+ promote cognitive and sensory function, gluconeogenesis in the liver, lipogenesis in adipose tissue, insulin secretion in the pancreas, and insulin sensitivity in muscle. NAD+ also promotes endothelial cell proliferation and protects against cardio- and cerebrovascular disease. NAD regulates immune function and inflammation and, protects against acute injury in the kidney. NAD promotes and extends fertility in both males and females, ostensibly by activation of sirtuins. 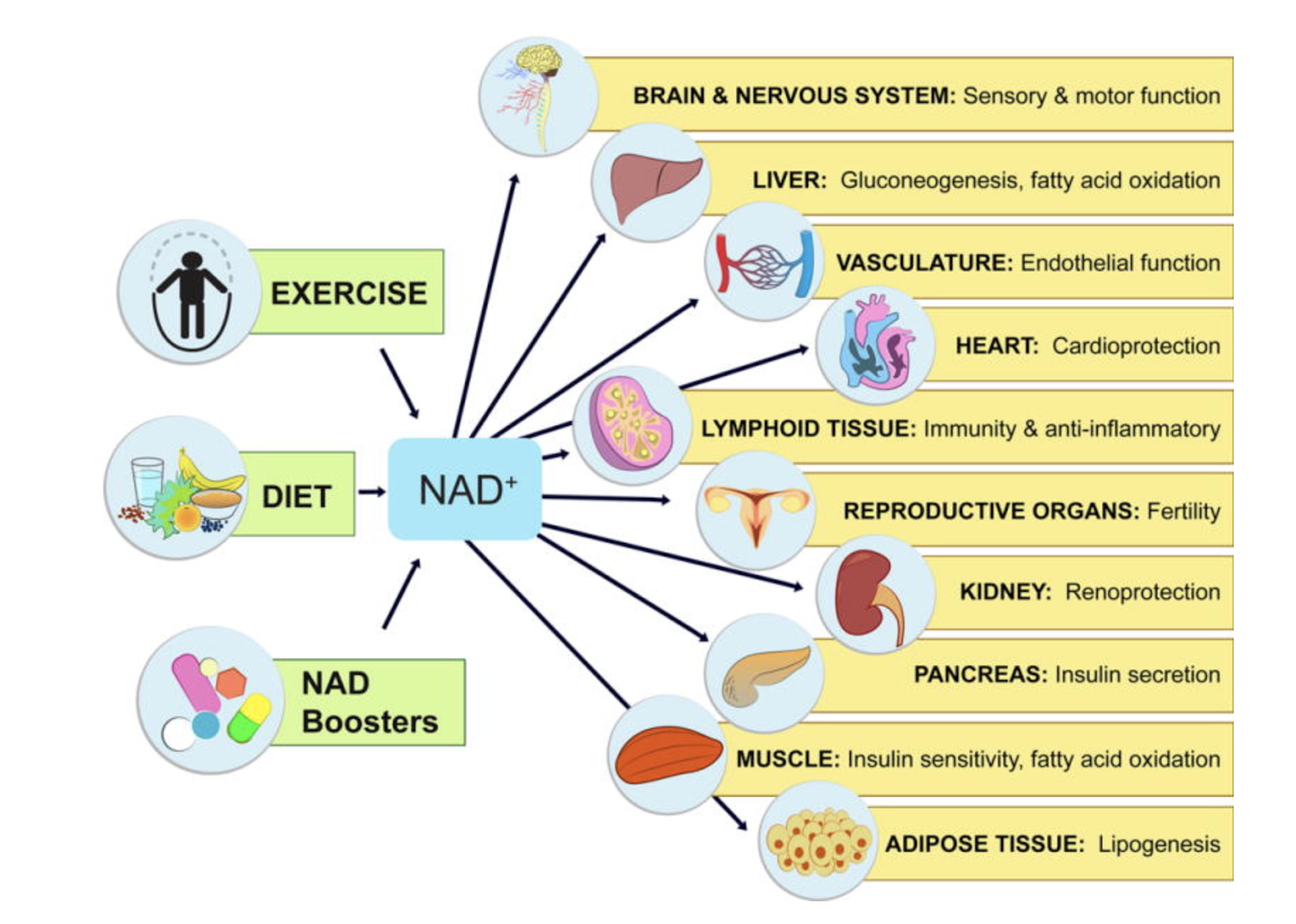 Liver Function: Key enzymes in NAD+ signaling pathways are known to protect the liver from fat accumulation, fibrosis, and insulin resistance, which are related to the development of fatty liver diseases, such as NAFLD and NASH.

Kidney Function: Several lines of evidence indicate that reduced levels of NAD+ in aged kidneys and a corresponding decrease in sirtuin activity are largely responsible for reduced kidney function and resilience with age (Ugur et al., 2015).

Endothelial and Vascular Function: Cardiovascular and cerebrovascular diseases contribute to the greatest decline in quality of life after 65 and are directly responsible for about one-third of all deaths (Nichols et al., 2014; Ungvari et al., 2010).

DNA Repair and Cancer: Because NAD+ is involved in so many aspects of cancer biology, from mitochondrial activity to cell survival, there are a variety of ways it could be used in the clinic. The rationale for reducing NAD+ levels in tumors is that they will be less able to repair DNA damage, thereby increasing their sensitivity to chemotherapeutic agents.

Immunity and Inflammation: There is a growing body of evidence that NAD+ precursors can have anti-inflammatory effects.

Aging and Longevity: Total NAD+ levels were once considered extremely stable. Recently, however, it has become clear that a steady decline in total NAD+ levels over time is a natural part of life for all species, from yeast to humans (Balan et al., 2008; Belenky et al., 2007; Lin et al., 2004; Massudi et al., 2012; Mouchiroud et al., 2013; Zhang et al., 2016; Zhu et al., 2015). This decline, along with the decreased activity of NAD+ signaling proteins, is believed to be one of the major reasons organisms, including humans, age.

A decline in NAD+ during aging is believed to be a major cause of disease and disability, such as hearing and vision loss, as well as cognitive and motor dysfunction, immune deficiencies, auto-immunity, and dysregulation of the inflammatory response leading to arthritis, metabolic dysfunction, and cardiovascular disease. In mouse models, NAD+ boosters prevent or treat a variety of different diseases, prompting a search for NAD+ boosters that are safe and effective as drugs to treat both rare and common diseases, and potentially aging itself.

Links to the study below

Therapeutic potential of NAD-boosting molecules: the in vivo evidence.

Semax is a heptapeptide and synthetic analogue of a fragment of adrenocorticotropic hormone (ACTH), ACTH (4-10). Semax is a neuroprotective peptide predominantly a nootropic, which has neurogenic/ neurorestorative properties. Semax rapidly elevates the levels and expression of the brain-derived neurotrophic factor (BDNF) and its signaling receptor TrkB in the hippocampus. The exact mechanism of Semax is unclear. During the past two decades, melanocortin peptides and receptors have received considerable attention regarding several CNS functions besides the regulation of energy control, and the multiple roles of the melanocortins represent an opportunity for therapeutic interventions. Molecular tools have allowed the identification of melanocortin receptors signaling in memory, reward, mood, nociception, and erectile function among others. A recent study investigated the effects of intranasally administered a selective MC4 receptor antagonist, and it resulted in marked resilience effects on the development of behavioral symptoms co-morbid with post-traumatic stress disorders. The melanocortin system has a well-established role in the regulation of energy homeostasis but there is growing evidence of its involvement in memory, nociception, mood disorders, and addiction. The involvement of the melanocortins in the regulation of behavioral and emotional states, neuroprotection, inflammation, and exocrine secretion are likely to spur the discovery of selective MC1 and MC5 receptor compounds. Semax is currently being prescribed for numerous conditions like anxiety, memory improvement, nerve regeneration, strokes, ADHD, Parkinson’s, ALS, and Alzheimer’s.

Protocol: Instill one spray in each nostril daily.

The peptide semax affects the expression of genes related to the immune and vascular systems in rat brain focal ischemia: genome-wide transcriptional analysis.

The possible role of Transthyretin in the biological mechanism of the regulatory peptide neuroprotection.

Selank is a synthetic regulatory peptide. It was designed and produced at the Institute of Molecular Genetics, Russian Academy of Sciences, in cooperation with the V.V. Zakusov Research Institute of Pharmacology, Russian Academy of Medical Sciences. Selank is a synthetic analog of the endogenous Tuftsin molecule, which was elongated at the C terminus via the addition of three amino acids (Pro-Gly-Pro) to increase its metabolic stability and allow a more extended duration. Selank has pronounced anxiolytic activity. It acts as a stable neuropsychotropic, antidepressant, and antistress drug that relieves aggression and fear reaction in different animal species. Selank has a nootropic action, which positively influences the formation of memory and learning processes. Selank has similar properties to the physiological effects of benzodiazepines. This suggests that there is a similar basis of their mechanism of action that is the allosteric modulation of GABA receptors. They enhance the GABA effect by allosteric modulation, which increases the frequency of opening of channels for chlorine ions. It does not have the unwanted side effects of Benzodiazepines such as withdrawal, dependence, and amnesia. Numerous clinical studies have shown that Selank has strong antianxiety and neuroprotective effects in the treatment of generalized anxiety disorders.

Protocol: Instill one spray in each nostril daily.

Neurodegenerative diseases are characterized by progressive neuron losses in specific brain regions that impact cognitive, sensory, and motor functioning. These disorders include Alzheimer’s disease (AD), Parkinson’s disease, amyotrophic lateral sclerosis, and Huntington’s disease. The destructive nature of the damage inflicted by these diseases results in a loss of patient dignity and self-worth and negatively impacts family members and friends.

The therapeutic value of this approach lies in its capacity to encourage the formation of new functional synaptic connections among existing neurons, encourage the replacement of damaged and lost neurons from available neural stem cell populations, and facilitate cerebral blood flow and neuroprotection. Such treatment outcomes would benefit patients afflicted with AD and possibly those suffering from other neurodegenerative diseases.

N-hexanoic-Tyr-Ile-(6) aminohexanoic amide (Dihexa), a potent cognitive-enhancing molecule that proved to be very stable, capable of inducing spinogenesis/synaptogenesis at picomolar concentrations, slowly cleared from the blood compartment, and sufficiently BBB-permeable.

Dihexa is a first-in-class compound that is orally active, penetrates the blood-brain barrier, and facilitates memory consolidation and retrieval. This angiotensin-based small molecule may be efficacious as a treatment for neurodegenerative diseases.

This small molecule was derived from the pre-prototype molecule Nle1-angiotensin IV. It has shown promise in facilitating the formation of new functional synaptic connections and augmenting memory consolidation.

The pharmacokinetic limitations of metabolic instability and an inability to pass the blood-brain barrier have recently been overcome by the design and synthesis of Dihexa, a novel AngIV analog. Dihexa has documented procognitive/antidementia activity, is metabolically stable, blood-brain barrier–permeant, and orally active (McCoy et al., 2013).

Dihexa has been known to work well when combined with Selank or Seamax.